A self-taught master of landscape and environmental photography, Peter MacDonald has spent many years living and working in the Australian “Outback”.

Having spent more than three decades honing his craft in order to produce quality photographic artwork that has been commissioned by the Flinders Ranges National Park, the South Australian Department of Environment and Natural Resources, and the new Royal Adelaide Hospital, the former pilot has made a name for himself as a sought after environmental photographer.

The many years Peter has spent building his skills and technique have allowed him to become familiar with the landscape he works within and this has given him the knowledge and ability to run three-day photography workshops for keen photographers wanting to improve their camera skills, learn better composition and discover landscape and environmental portraiture with an expert. 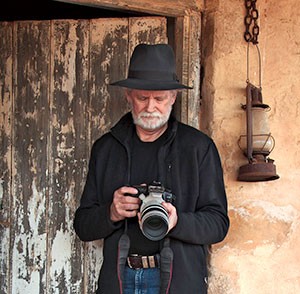 “The Flinders Ranges and the outback have been in my blood more than 30 years,” he says. “Having real contact with the country and its people, and knowing how the weather or the seasons affects the land makes a big difference and it shows in my photography. Understanding the geology, the fauna and flora, and being able to see and touch it first-hand, as well as learning from the people who make their lives here is so important.”

In recent times Peter has taken on a new project – applying the same principles of observation, timing and composition to the Coorong region of South Australia’s southern coast. He’s created a gallery at his home on Hindmarsh Island which for the first time showcases a wide variety of his work. It’s here that he now takes workshops. He’s also considering an intern project for emerging photographers wanting a sound base to further their interest.

Australia is a big country and Peter’s photography encompasses its vastness and beauty, He tends to present his photography on large prints.

Purchase Peter MacDonald’s photography or join a workshop to learn the techniques of an experienced, professional environmental photographer with a passion for the land and its grandeur.