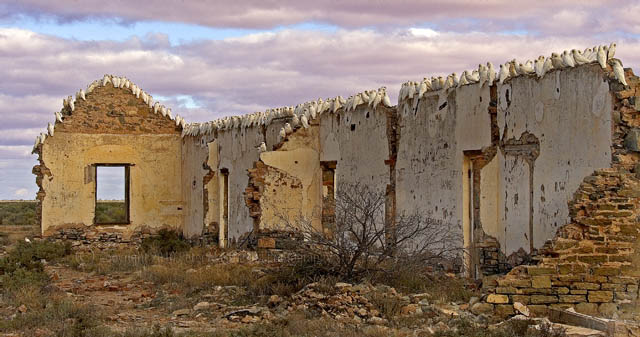 A scene from Alfred Hitchcock’s thriller ‘The Birds”?…no!

On some of the outback roads that I frequently drive along I sometimes go into auto-pilot mode.

There’s not much of interest about these ruins of a fettlers cottage on the old Ghan railway line north of Parachilna (Google Maps – Parachilna), particularly when I’ve been past them scores of times.

It took me a half a kilometre to realise something was different this time. I turned and went back. I could hardly believe it. The old ruins were covered in little white Corellas. I was sure they would fly away as soon as I got the camera out, but no, they just sat and posed for me.

Corellas are known for gathering in enormous flocks. When they do, they can drive you nuts. The noise is deafening and they can reduce a stately tree to a tattered ruin in no time.

It’s more common for them to gather around trees and waterholes – rarely on buildings.