Women is strange. You take my tip. I’m wise.
I know enough to know I’ll never know
The ‘uman female mind, or wot su’prise
They ‘as in store to bring your boastin’ low.
They keep yeh guessin’ wot they’re up to nex’,
An’ then, odds on, it’s wot yeh least expecks.

verse taken from the poem ‘A Woman’s Way’
C.J Dennis – the Sentimental Bloke

Now I’m not really into sneaking around people’s bedrooms. Voyeurism isn’t my thing so I swear this was an accident. It certainly was a surprise to me and an unfortunate lover. 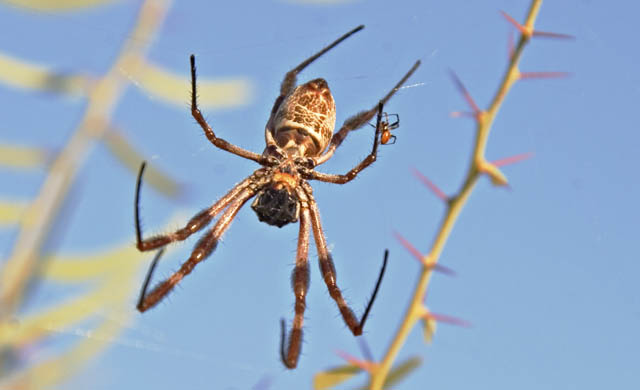 I’m trying to take a picture of a really sexy Golden Orb spider. Anyone can see she’s a real looker.

I’m busily trying to make sure I’ve got the dame in focus. She’s hanging by a thread so to speak and there’s a bit of a breeze. Focusing is not easy.

I don’t see Mr. Golden Orb doing a bit of fore-play with her foot.

I’m still totally focused on getting Mrs Orb nice and sharp in the lens.

The breeze isn’t helping and the 28-300mm Canon lens isn’t getting any lighter. As I blaze away I still haven’t seen the little seducer who, by now is on her abdomen.

Obviously I’m no expert on these things but I guess it’s down to business. 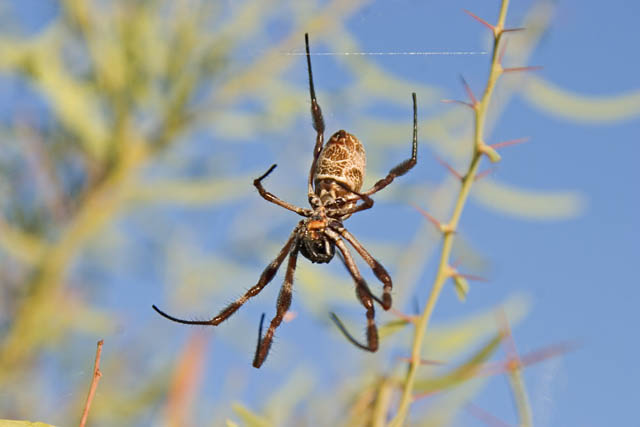 Ok, here comes the really gruesome bit and I don’t discover any of this drama until I see these photographs full size.

Clearly mating is over and Mrs Orb is now cheerfully devouring her besotted mate. I didn’t even see him make a run for it. Oh the evil Siren!

This apparently is standard female behavior in the Golden Orb household and the hapless male very often loses his head.

Love-making and the meal is over, Mrs Orb settles back to capture here next meal.

The male is generally one fifth the size of the female.

Still I suppose there’s as happy ending of sorts when the new baby Orbs arrive on the scene and Mrs Or has lost those shapely curves.