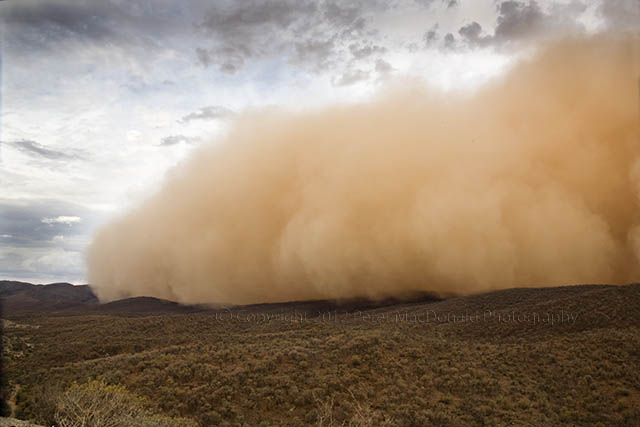 Each year the Bureau of Meteorology puts out a calendar of spectacular weather scenes from around the country.

The 2013 Met Bureau calendar features a photos of mine of a dust storm over Arkaroola in the northern Flinders Ranges a few summers ago.

It is one of three pictures taken of the front at pretty close quarters. I had been hanging onto the shots in the hope I could make a triptych out of them. That’s if I could find a wall big enough to do them justice.

There’s a pretty good explanation of the actual storm and how it formed from a meteorological point of view by going to the Met Bureau site HERE where you can also purchase a copy of the calendar.

The photos does give a pretty good idea of the size of the storm. The hills and mountains of Arkaroola, which are quite substantial, appear almost dwarfed by the incoming front.